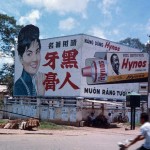 To celebrate its 50th year, The New York Review of Books is republishing pieces from its formidable archive. Among them is a report from Vietnam by the novelist and critic Mary McCarthy (1912-1989) that first appeared in 1967. McCarthy was an opponent of American involvement there, something she makes clear from her first line. It’s a partisan piece, but the first section of it is also a vivid description of Saigon at a particular moment in time: “As we drove into downtown Saigon, through a traffic jam, I had the fresh shock of being in what looked like an American city, a very shoddy West Coast one… Not only military vehicles of every description, but Chevrolets, Chryslers, Mercedes Benz, Volkswagens, Triumphs, and white men everywhere in sport shirts and drip-dry pants. The civilian takeover is even more astonishing than the military. To an American, Saigon today is less exotic than Florence or the Place de la Concorde.”