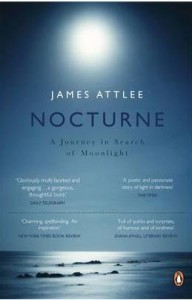 There’s a long tradition of the author scribbling for his or her supper as a writer-in-residence, in establishments ranging from five-star hotels to Her Majesty’s prisons. James Attlee has recently been working as a writer-on-rails, travelling the network of First Great Western on behalf of the operator, collecting stories and blogging as Writer on the Train.

His preoccupation in his books has been with the world we tend to overlook because it’s under our noses: in Isolarion, he took a journey down his own street, the Cowley Road in Oxford; in Nocturne, he turned his attention to the moon and the light it casts, and the connections we have lost with both as a result of polluted skies and the mad pace of modern life. These books, he says, were researched on foot but largely written up on the train. In a recent post as Writer on the Train, he reported on how Paddington station is protected from unwanted visitors.