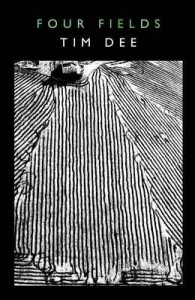 I can’t help imagining an initial pitch to agent or publisher, made over a beer in a Cambridgeshire pub.

“Right, Tim: The Running Sky was a beautiful book, but the second one is always harder. How are you going to follow it?

“Well, I want to write a book about four fields.”

“What – as in grassy fields?

“Yes, they are all grassed at the moment, as it happens…”

In The Guardian a couple of weeks ago, Stephen Moss (editor, incidentally, of The Hedgerows Heaped with May: The Telegraph Book of the Countryside) chose Four Fields by Tim Dee (Jonathan Cape) as one of his nature books of the year. I think it’s going to be one of mine, too.

The fields of the title are the Cambridgeshire fens, a colonial farm in Zambia, the Little Bighorn Battlefield in Montana, and a former cow meadow near the exploded nuclear reactor at Chernobyl, in Ukraine: “a few hundred acres standing for the world”. There are digressions and diversions, too, into other plots and acreages, other examples of this “best thing of man, and the thing of his that is nearest to becoming nature”. Dee wants us to look through these places at the wild and how we have messed it up, but also at how we have kept going alongside it.

So far (I’m on page 79), I’ve walked with him through the Fens and into the Maasai Mara. He’s been a compelling guide, combining the attentiveness of the birdwatcher he has been since the age of seven with the soul of a poet. He is as good on wild death as he is on wildlife:

“The new dead steamed as vultures stoked at open ribcages. The old dead liquefied under the sun in a meltdown to meaty molasses. Bones blurred in a hymn of flies. Grass grew livid from beneath, through bleached bone houses. Grass grew livid from within, pulling up from ruptured guts; a last meal germinated, juiced into life by rot. A wildebeest grazed on the grass that sprouted from the stomach of a wildebeest.”

I’ve read countless descriptions of the wildebeests’ great migration and their croc-imperilled crossing of the Mara River. Dee, as he does with fields in general, made me look at it afresh:

“Entering the slapping river they seemed stripped naked, forced to endure a swimming lesson by an instructor who, for all his severities, sits nowhere but in their own heads.”

I’m looking forward to following him further, but I’m conscious, too, that there aren’t many shopping days left before Christmas. So, from page 79, here’s a recommendation: one to buy.