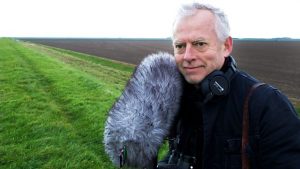 I’ve got East Anglia rather than Carolina on my mind. In the past week, I’ve watched Richard Alwyn’s quirky BBC4 film Into the Wind, in which he follows Tim Dee’s attempts to capture “the song of the earth” on The Wash (right); finished reading Richard Mabey’s Nature Cure (which I should have read a long time ago); and dipped into a recent (2015) anthology, Est, from the independent publisher Dunlin Press (one of whose founders, Martin Bewick, has, I see, just brought out a volume of his own poetry, Scarecrow).

Dee has spent much of his life recording people (often poets) in and out of doors for radio. He says that as he has grown older he has become “more and more keen on listening to the sound of the world after we’ve all shut up.” That’s what he sets out to do around the Wash, with Alwyn following his efforts.

It is, essentially, a film of a bloke wandering around, talking about the weather and trying to record pure wind. There’s not much to see beyond long flats and big skies, not a lot happens, and the viewer is denied close-ups of the birds Dee watches from time to time through his binoculars. It shouldn’t work as a piece of TV, and yet it does. If you missed it last week, it’s still available (for another few weeks) on the BBC iPlayer.

Richard Mabey is another man with a keen ear for wild sounds. Until February, when I picked up Nature Cure while browsing in a bookshop, I’d been familiar with his reputation, but not with his writing. The author of some 30 books, including the bestselling Flora Britannica and a prize-winning biography of Gilbert White, he has long been regarded as one of Britain’s finest writers on the natural world. Nature Cure makes a pretty good introduction to the man and his work. It’s about the depression that overcame him when he had finished writing Flora Britannica, his forced removal from a house in the Chiltern Hills where he had lived for half a century and his relocation to an entirely different landscape, in Norfolk. Arriving there, in a mood as long and low as the fens, he came to feel, over the space of a year, the “healing currents of the outdoors.”

Those currents are in evidence, too, in Est: Collected Reports from East Anglia, edited by MW — Martin — Bewick and Ella Johnston (co-founder of Dunlin Press). It’s a collection of prose and  poetry by people with an interest in East Anglia — a landscape that, in the view of the novelist and film-maker Chris Petit, who has written a foreword, is “the most cinematic… that we have.”

Contributors include Rosie Sandler, who lives near Maldon, in Essex, but was born in the North, where she “learned a hundred words for rain, spooned from my grandmother’s lips”. For her, East Anglia is a place

where there’s no need
for rain
because it’s everywhere:

this estuary
gaping its teeth
to the sky,
spitting out herons
and egrets,
gargling swans like gutturals.