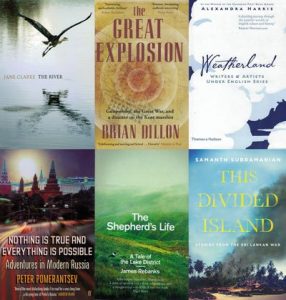 “The news is the incense by which we bless Putin’s actions”: that was a remark Peter Pomerantsev heard time and again from producers while he was making reality-TV shows in Moscow. Nothing Is True and Everything Is Possible (Faber and Faber), his electrifying portrait of Vladimir Putin’s Russia, won him the £10,000 RSL Ondaatje Prize last year, for “a distinguished work of fiction, non-fiction or poetry evoking the spirit of a place”.

It’s a book that seems, if anything, more timely than it did on publication, given how many world leaders are demanding benediction from the media.

The judges for this year’s prize — Alexandra Harris (short-listed last year for Weatherland), Henry Hitchings and Mimi Khalvati — are due to reveal their short list of six books on April 26; the winner will be announced at a dinner at the Travellers Club in London on May 8. Meanwhile, courtesy of the Royal Society of Literature, I have a prize of my own to offer: all six of the books that were short-listed last year.

The five others were:
The River by Jane Clarke (Bloodaxe Books), a debut poetry collection rooted in family life and on the farm where Clarke grew up in the west of Ireland.
The Great Explosion by Brian Dillon (Penguin), an exploration of the marshlands of north Kent and their military-industrial past;
Weatherland by Alexandra Harris (Thames & Hudson), an account of how weather has been written and painted in England through the centuries;
The Shepherd’s Life by James Rebanks (Allen Lane), a bestselling account of Lake District farming that began as a Twitter feed; and
This Divided Island (Atlantic Books) by Samanth Subramanian, in which the Indian Tamil writer examines the scars left on Sri Lanka by its 26-year civil war.

To be in with a chance of winning the six books, just retweet my tweet about the prize on Twitter from both @deskboundtravel and  @kerraway.

Terms and conditions
Entrants must retweet the mention of the RSL prize on Twitter from both @deskboundtravel and @kerraway by midnight on Wednesday, April 18. Only one copy of each of the six short-listed titles is available to the winner, who must be resident in the United Kingdom. The winner will be selected at random and notified by Monday, April 24. Unsuccessful entrants will not be contacted. For more information about the Ondaatje Prize, please see the Royal Society of Literature’s website.