As a boy growing up in the North of England, AJ Lees was carried away by the story of a Victorian explorer, Lieutenant-Colonel Percy Fawcett, who disappeared while looking for a “lost city” he called Z in the valley of the Amazon. In Brazil That Never Was (Notting Hill Editions), Lees, now a distinguished neurologist, tries to recapture something of what he felt as a child by re-reading the work of his former hero; he also learns a great deal more about the man himself. He discovers that Fawcett wasn’t just looking for a lost city; he was immersed in the occult, and searching for a place that (as Lees puts it) “lay beyond the deceptive boundary of everyday consciousness”; a place where he could set up a community involving the worship of his own son.

Lees buries himself in Fawcett’s papers, and in “a new curriculum” embracing everything from alchemy to tantra. He concludes that much of what Fawcett believed was “bunkum”, but he also declares that “the methods of reason and science that stemmed from rational consciousness were unable to provide me with a purpose to life” — and he associates Fawcett with “my longing for a time that could never return”.

His book reminded me of The Encounter by Petru Popescu, the story of how Loren McIntyre, the otherwise solidly rational American who would go on to establish the true source of the Amazon, reported having what felt like “telepathic” conversations in 1969 with the chief of an Amazonian tribe; a tribe intent on escaping loggers, drillers and missionaries by returning to “the beginning” — to pre-Columbian times.

Lees has said elsewhere that, as a boy, he wanted to become “the next David Attenborough”. I happened to open Brazil That Never Was the night after the current David Attenborough, presenting Extinction: The Facts on BBC1, had reminded us — because we still need reminding — of the interconnectedness of everything in the natural world. On page 19 of Lees’s book I came upon this: “[Richard] Spruce was the purest of all the great Victorian plant-hunters… He had walked into the hell of the dark wood and come face to face with the heart of creation. Through his time with the Indians, he realised that the natural world was a sacred web of exchange of which Man was one small part.”

Lees’s book runs to fewer than 140 pages, so I read it in one sitting. I was impatient for him to set off for Brazil himself, which he doesn’t do until 17 pages from  the end. But it’s still a compelling story, with vivid images of St Helens, where he spent his early years, and Liverpool, which he visited on weekends and school holidays: “a musical somewhere else where time and being had been created by the motion of irregular, turbulent tides”.

All Notting Hill Editions’ books, which are beautifully produced, are linen-bound. This one’s in a dark green that’s surely a nod to the one Lees was handed as a child by his father in the Oakwood Library in Leeds: “a dog-eared book with soiled green cloth boards called Exploration Fawcett“.

The short list was announced last week for the Boardman Tasker Award for Mountain Literature. Among the five books is Two Trees Make a Forest (Little, Brown), the acclaimed debut by Jessica J Lee, founding editor of The Willowherb Review. Also included is The Unremembered Places (Birlinn), in which Patrick Baker explores far-flung ruins and relics — from a cemetery for dam-builders to the remains of illicit stills — that serve as archives for Scotland’s “wild histories”. It’s a haunted and haunting little book (just over 200 pages).

The winner of the award will be announced on November 21 at the Kendal Mountain Festival, which this year, like so many events, will probably be online only.

Book of the Week on Radio 4 from today is Eat the Buddha (Granta), Barbara Demick’s account of modern Tibet told through the lives of the people of one town.

There’s a passage in Diary of a Young Naturalist (Little Toller) in which Dara McAnulty writes of trips on which each member of his family, from youngest to oldest, chooses a song to be played on the car stereo: “Our journeys around Fermanagh usually take half an hour, which means two music cycles each — though Bláthnaid [his sister] sometimes gets three, depending on traffic. Today is one of those days, so when ‘My Little Pony’ comes back on again Lorcan [his brother] and I roll our eyes and try not to moan at the high-pitched rubbish about everyone being winners and other saccharine impossibilities…”

Yesterday, Dara, an autistic boy of 16 who loves punk music and wants to be a scientist, was a winner. He took the Wainwright Prize for UK nature writing for his extraordinary debut, in which he tells of the connections he feels to wildlife, the way he sees the world, and how he weathers storms with the help of a family who are “as close as otters”.

This year’s prize was extended to include a second category for books about global conservation and climate change. The winner was Benedict Macdonald for Rebirding (Pelagic Publishing), which, the judges say, “sets out a compelling manifesto for restoring Britain’s wildlife, rewilding its species and restoring rural jobs – to the benefit of all”.

Exploration, Wade Davis declares in a piece this week for the Financial Times, has too often been driven by a desire for personal glory and fame. The same, he reckons, is true of much travel writing. He urges us to follow the examples of Rasmussen and Herodotus, and to see “beyond the shadow of self”.

Davis has just published an account of what he calls “the Mississippi of Colombia”, Magdalena: River of Dreams (Bodley Head, £14.99), a book he was researching and writing for nearly five years. He says:

I came to know the river… in all its dimensions, in all months of the year, with every shift of the seasons, from the headwaters in the Macizo Colombiano to the sand and stones of the Caribbean shore. At no point, however, was I tempted to paddle the Magdalena from source to mouth, or to travel its length in a single journey, hitching rides perhaps on a series of barges and river boats. Admirable as such achievements might be, my goal was not to produce a study of self, an account of a personal journey; it was to write a biography of Colombia through the metaphor of the river that made possible the nation. When in doubt, an author should always get out of the way. Building a narrative around self is to travel writing what false heroics are to exploration.

Reviews of Magdalena have appeared in publications including The Guardian and The Spectator.

If you missed the recent Edinburgh Book Festival online event on travel writing, “The lie of the land”, featuring Kapka Kassabova and Gavin Francis, you can catch up on YouTube. In the session, chaired by Clare English of the BBC, the two introduced their new books, reflected on the challenges of being creative during a pandemic, and talked of what they had learnt from their travels and the writing.

Update, September 3: For some reason the video is no longer available. I’ll see if I can find out why.

Jean McNeil, a compulsive traveller forced by the pandemic to stay at home, ranges far and wide in the pages of the latest Literary Review of Canada, reflecting on restlessness, freedom and the enduring power of Elizabeth Bishop’s poetry:

Travel is often tedious and upsetting, never mind dangerous. Over the years, I’ve been snarled in New York, where I found myself underneath the World Trade Center as both planes struck, and then marooned for weeks afterwards when all aviation was cancelled. I’ve been stuck at Toronto Pearson after an Air France flight crashed on the runway, stymied by polar whiteouts in Antarctica, stranded by volcanic eruptions, and abandoned by the Royal Air Force on a tiny island in the middle of the Atlantic. But the pandemic is the most effective grounding I’ve experienced. As I scour the silent London skies for planes, I consider what I have lost or, more precisely, what has been rescinded.

Barbara Demick’s Eat The Buddha, which I’ve mentioned a few times, most recently in a roundup of forthcoming books, was reviewed in The Observer at the weekend by Tania Branigan, a former China correspondent for The Guardian. The Observer also had a review, by Tim Adams, of a new essay collection, Vesper Flights, from Helen (H is for Hawk) Macdonald, which is currently Book of the Week on Radio 4. 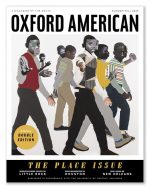 The excellent Oxford American magazine, which covers the South, has a new double issue exploring the theme of place. Contributions, as the editor, Eliza Borné, explains in her introduction, are “all rooted in various historic, and sometimes personal, events, yet united by connection to the four core elements” — soil, wood, water and stone. I particularly enjoyed one of the earliest pieces to go online, in which Holly Haworth writes of the places she and her dog have explored over the years:

He was fox-red, his pelt vivid against the bare trees as we wound through them. He was a tug at my waist, pulling me down the path behind the old marble quarry, to the glinting river. I followed him deeper into the place I lived. He stopped often to put his nose to the ground, the burnished-gold leaf litter: traces of scent left by animals, made visible to me by the lines his nose drew across the earth.

I set forth on foot following this tug of energy that urged my legs to walk. The circle of my life, small as it was, widened outward.

I’m looking forward to reading the rest of the issue. 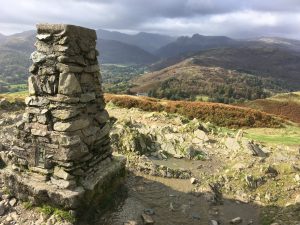