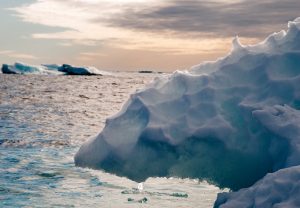 If you’re drawn to cold places, or just to reading about them, and you’re not a long way from Notting Hill, you might want to add this to your diary. On February 7, the Lutyens and Rubinstein Bookshop is bringing together two writers whose subjects are Poles apart. One is Jean McNeil, whose Ice Diaries: An Antarctic Memoir, was acclaimed on its publication in 2016 in Canada and is now available in Britain from the same imprint, ECW Press. The other is Michael Bravo, who has spent his career travelling and researching in the Arctic and writing about the region, and whose latest book, North Pole, a cultural history, is due out on February 21 (Reaktion Books).

Writing about the Antarctic is “the aesthetic equivalent of scaling Everest”, the British-based Canadian writer Jean McNeil says in the Review section of The Guardian today. She names a few people who have been up to the task, ranging from Ernest Shackleton to Jenny Diski. McNeil herself has been writer-in-residence with the British Antarctic Survey. Ice Diaries (published in 2016 by ECW Press) tells of that stint and her subsequent travels in Greenland, Iceland and Svalbard; you can read an extract on her website.

David Grann has turned his article for The New Yorker on the Antarctic journeys of Henry Worsley into a short (150-page) book. The White Darkness is due to be published in Britain on November 1 by Simon & Schuster.

Michael Palin’s Erebus (Hutchinson), the stirring story of a Victorian ship that went to the Poles, is currently Book of the Week on Radio 4. You can read my review of it — which appeared at the weekend in The Daily Telegraph — here on Deskbound Traveller.

The New Yorker has a tremendous piece from David Grann about Henry Worsley and his “compulsion to subject himself to suffering” in the Antarctic. Worsley died in 2016 after pulling out just 30 miles short in his quest to be the first person to cross the peninsula alone and unassisted. He was already the only person ever to have completed the two classic routes to the South Pole established by his Edwardian predecessors, Scott, Amundsen and Shackleton. The last was his own particular hero; whenever Worsley was in a fix he would ask himself: “How would Shacks get out of this?”

If you want to see how travel has changed, look to Antarctica, says Peter Hughes. A century ago, it was populated by a handful of men who had taken four months to get there and then struggled to survive. Today it’s one of the world’s bucket-list tourist destinations, drawing almost 40,000 visitors a year. He went there, in the run-up to last Christmas, for Telegraph Travel…

“The Mars of the Mid-Atlantic”, Ascension Island, is the subject of a programme by Peter Gibbs and Matthew Teller due to be broadcast on Radio 4 tomorrow at 3.30 pm. If it’s as good as Teller’s excellent piece on the Halley Research Station in Antarctica — which I’ve only just caught up with because I was away and offline when it appeared in March — it should be well worth a listen. Ever wondered how people end up working down there? Me too. Teller offers an answer: “Most of Halley’s heavy-duty vehicle drivers are recruited from BAS adverts placed in Farmers Weekly magazine.”

Another piece I missed, again on Antarctica, was by Peter Hughes in the FT (and worth signing on to read). A century on from Shackleton’s doomed expedition, he retraced its course on a ship with giant buffets and a band in woolly hats.

Here’s a hotel recommendation with a difference from Will Self in The New Statesman after a stay in Plymouth: “As I’ve had cause to remark before, there’s nothing I like more, when the evenings draw in and the wind gusts hard, than to lie in bed – preferably in an overheated old pile like the Duke of Cornwall – and read about the British officer class getting their bollocks frozen off in Antarctica.”

One of the purposes of Deskbound Traveller is to seek out great travel writing in places where it hasn’t been looked for much before — not just in the shelves marked “Non-fiction” but in those labelled “Fiction” and “Poetry”.  The Royal Society of Literature’s Ondaatje Prize, an annual award of £10,000 (sponsored by Sir Christopher Ondaatje, the businessman, adventurer and writer), is for a “distinguished work” in any of those forms “evoking the spirit of a place”. Since the prize’s inception in 2004, winners have included titles as diverse as In the Country of Men, the debut novel of the Libyan writer Hisham Matar, and Sissinghurst: An Unfinished History, Adam Nicolson’s account of life and times in his family’s stately home.

The books short-listed for this year’s prize will be announced at the end of this month or early in May. I’m hoping to publish short extracts from each of them in Telegraph Travel and then a longer piece from the winner or an interview with him or her. Over the next few weeks on Deskbound Traveller, I will be publishing extracts from some of the titles that were short-listed for last year’s prize. I’m starting today with an excerpt from Empire Antarctica by Gavin Francis, who realised his dream of living alongside emperor penguins by signing up for a year as a doctor with the British Antarctic Survey.

Residents of most US cities have reacted to the conditions of the “polar vortex” by staying indoors. Residents of  Antarctic research stations  take a different approach to climatic extremes: when the temperature falls to record levels, they go streaking. Svati Kirsten Narula, in The Atlantic, explains.