The London Review of Books has a previously unpublished piece by Patrick Leigh Fermor, a celebration of the olive harvest that was written for the Greek edition of Mani (1958) but not used in it.

The unflagging swish! swish! swish! is the predominant sound all through the harvest. The olives that patter on the cloth like rain are piled in pyramids; children who are too young to be left alone in the empty village chase each other between the trees; dogs bark, mules nibble the new grass and white goats tear the leaves from the stripped twigs that cover the ground.

The Dutch writer Cees Nooteboom has been visiting Venice since 1964. It wasn’t until his tenth visit, though, that he finally took a ride on a gondola, a convenience he had always seen as “tourism, affectation, theatre, something for other people”. In his latest book to be translated into English, Venice: The Lion, the City and the Water (MacLehose Press, £20), he reports on the experience. There’s an extract from the book on the excellent Literary Hub site.

A proposed new railway could bring more industry and jobs to Lapland — but it could also wreck Europe’s last great wilderness and spell the end of the traditional reindeer-herding life of the Sami people. Tom Wall and the photographer Joel Redman produced an excellent report for Guardian Weekend (which I’ve only just got round to reading because I was busy the Saturday it appeared — February 23).

The border between Northern Ireland the the Republic of Ireland runs through Lough Foyle. For 1843 Magazine (the culture, lifestyle and ideas magazine from The Economist), Garrett Carr has taken a trip round a lake that could soon divide Britain from Europe. If you haven’t read it, by the way, I thoroughly recommend Carr’s book about Ireland’s border country, The Rule of the Land (Faber & Faber), which was short-listed for the 2017 Stanford Dolman Travel Book of the Year.

Having been away recently myself, I’ve been slow to catch up with a podcast from Telegraph Travel, “Edgelands”, based on a 5,000-mile journey that Ash Bhardwaj is making from Arctic Norway to Moldova through countries that border Russia. For the first episode, he reported on the Seto people, who, in the days of the Soviet Union, travelled freely between Estonia and Russia. Since 1991, however, when the Iron Curtain was blown down, their lives have grown more, rather than less, complicated. As I listened, I kept thinking of those people living on the currently soft border on the island of Ireland…

The Stopping Places by Damian Le Bas (Chatto & Windus), which I mentioned recently, was reviewed last weekend in The Observer by Tim Adams, who thought it a “lyrical, keenly researched… journey in search of authenticity”. Adams’s piece is now online. The Observer also had a review by Kate Kellaway of Notes from the Cevennes: Half a Lifetime in Provincial France by Adam Thorpe (Bloomsbury Continuum), who moved with his family to France 25 years ago and has written about it in columns for the TLS. Kellaway says it is an “affectionate, appreciative and perceptive” memoir, but one that “serves as a corrective to unchecked dreams of living in France”.

Nick Hunt’s Where the Wild Winds Are (Nicholas Brealey) was one of my favourite travel books of 2017 and one my fellow judges and I short-listed for Stanford Dolman Travel Book of the Year. It’s now out in paperback and, courtesy of the author and his publishers, you can read an extract here on Deskbound Traveller.

The author, having spent four months in the Lake District, is now on the road promoting the paperback. He will be at the Bath Festival on May 24; at Convivium, in the Brecon Beacons, on June 23, and at Ways with Words, in Dartington, Devon, on July 12. (At the start of June he will also be at the Trieste Festival of the Bora — named for one of the winds he followed — to launch the Italian translation of the book, which has the beautiful title Dove Soffiano i Venti Selvaggi.)

My review of The Debatable Land by Graham Robb (Picador), a fascinating book about a territory that once lay between Scotland and England but was part of neither, appeared in print in The Daily Telegraph last weekend but isn’t online. The Telegraph, for some reason, no longer puts much of its literary material into cyberspace, but you can read the review here on Deskbound Traveller.

Iain Sinclair’s The Last London, which has been promoted as his farewell to a city whose streets he has tramped and written about for 50 years, has just been published in the United States. To mark the occasion, the Los Angeles Review of Books has “An A-Z of Iain Sinclair” that’s entertaining while being educational about the man’s way of working. It was written by Geoff Nicholson, who, like Sinclair, has made good use of the London A-Z street atlas while researching both fiction and non-fiction.

(At the time of UK publication, last year, Sinclair himself delivered a lecture for the London Review of Books and subsequently wrote a piece for the magazine. You can hear the lecture and read the piece on the LRB site.) 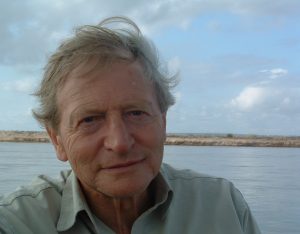 Over the past 40 years or so, in his wanderings across sub-Saharan Africa, Brian Jackman (right) reckons he has spent the best part of four years under canvas. He has become renowned for his writing on the African bush and its wildlife, and particularly for his chronicling (with the photographer Jonathan Scott) of the daily drama of life and death on the plains in The Marsh Lions and The Big Cat Diary. But he has also found inspiration closer to home. Close, indeed, to where I’m sitting as I write. I live in Stoneleigh, Surrey, and Jackman, now 82 and long resident in Dorset, lived as a boy a few streets away during the Second World War, over the road from my nearest sizeable patch of greenery, Nonsuch Park. In a new collection of his journalism, Wild About Britain (Bradt), he writes:

But Nonsuch wasn’t the real countryside. He discovered the latter on annual holidays to Cornwall, made possible because his father was a railwayman. Then, when the Blitz was at its height, he was sent to live on a farm near Bude:

For two years I never went to school. Instead, I fed the pigs their daily slops, hunted for hens’ eggs in the nettle beds and learned to milk the cows by hand, leaning my forehead against their warm flanks while swallows twittered in the rafters and the pail foamed white between my knees… It was, I suppose, an unhappy time for an eight-year-old, alone and far from home, but its magic haunts me still… Hardship there was, heartache and cruelty, but beauty and wonder, too, and the awakening of a love of all things wild that has stayed with me to this day.

That love is evident in every piece in Wild About Britain — whether Jackman is in search of the spirit of Laurie Lee in the Cotswolds or watching an otter in Shetland; whether he is introducing us to his favourite corner of Dorset (“a rumpled, tumbling green-gold land of secret combes and sensuously rounded plum-pudding hills”), or striving to understand the single-mindedness of one of his angler mates in pursuit of roach (“A trio of mute swans float past like icebergs in the swirling current, and my mind drifts with them.”).

Many of the pieces appeared first in The Daily Telegraph, and some of them I read before they appeared in print. They never needed editing, just breathing on. My favourite piece in the book is one that embraces two of Jackman’s greatest passions: Cornwall and peregrine falcons. You can read it here on Deskbound Traveller. Then you really ought to buy the book.