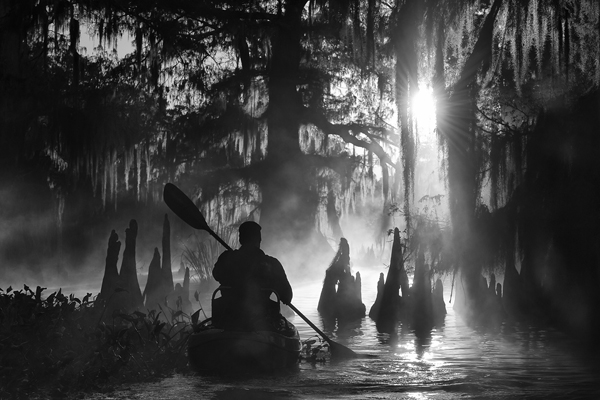 Pictures of Louisiana (including the one above) are part of a portfolio with which Marsel van Oosten, a Dutch nature photographer, has just won the Travel Photographer of the Year competition. They put me in mind of the work of James Lee Burke, who in his novels about Detective Dave Robicheaux conjures a world in which you can smell the bayou and all but taste the po’boy sandwiches. They reminded me, too, of a programme broadcast earlier this year in the “Crossing Continents” slot on Radio 4 by James Fletcher. It’s about erosion of wetlands in southern Louisiana caused by the taming of the Mississippi and oil and gas exploration. A football field of coastal land is being washed away every hour.

Coffee country seems to be flavour of the year among documentary photographers. A few months ago, Steve McCurry published From These Hands: A Journey Along the Coffee Trail (Phaidon), for which he travelled from the foothills of the Andes to the slopes of Kilimanjaro, through eight countries and four continents, to record landscape, labour and life away from the fields.

At the end of this month, Sebastião Salgado, a native of one of Brazil’s biggest coffee-growing regions, will present his own take on the trade — in black and white, as usual — in The Scent of a Dream: Travels in the World of Coffee (Abrams).

And today, Stuart Freedman — who’s a little younger than these veterans (he was born in London in 1967 and has been a photographer since 1991) — publishes The Palaces of Memory: Tales from the Indian Coffee House (Dewi Lewis), for which he visited more than 30 of a network of worker-owned cafes in cities throughout the subcontinent. The Coffee Houses, he says, “were an echo of the cafes — greasy spoons, really — that I grew up with in the Hackney of my childhood in east London. They spoke to me in a way of the faded hopes and dreams but also of the poetry and politics that were discussed. I always visit the one on College Street in Kolkata for the history and the one in Shimla for the impressive gathering of old men who will inevitably drag you to their table and invite your opinions on just about anything.” While he was still raising money for the project, he told the online journal Roads & Kingdoms what had inspired him.

In his Guardian piece last weekend, Robert Macfarlane (see earlier post) mentioned a forthcoming book by the photographer Dominick Tyler, a visual glossary of the British landscape.  Tyler was inspired by Home Ground, the project in which Barry Lopez recruited his fellow writers to provide “language for an American landscape”. Tyler had no intention, however, of attempting to produce an encyclopaedia. “A definitive glossary,” he says, “would contain many dull pictures of fascinating things and many fascinating pictures of dull things”. So in his book, Uncommon Ground, he has been selective, choosing features or phenomena – from ait to zawn – that make for powerful pairings of  pictures and words. The book won’t be published (by Guardian Books/Faber and Faber) until March 19, but you can get some sense of his approach from his promotional video.

If you were lucky enough to see the exhibition “Genesis” by Sebastião Salgado earlier this year at the Natural History Museum in London, you will know it was a powerful reminder of the power of black-and-white photography.  Pictures from that project, plus others from his 40-year career, can be seen in a new show opening at the Beetles and Huxley gallery in London on Wednesday. For details, see my piece for Telegraph Travel.