The taiga is black. The trees are shedding their snow. Dark patches appear on the mountains. Aika and Bek rush up outside the window at first light. When two little dogs celebrate your advent in the morning, night takes on a flavour of expectation. A dog’s fidelity demands nothing, not a single duty. Canine love is satisfied with a bone. Dogs? We make them sleep outdoors, we speak roughly to them, snap at them, feed them on scraps, and now and then – whap! A kick in the ribs. What we deal out to them in blows, they give back to us in drooling adoration. And suddenly I see why man has made the dog his best friend: this is a poor beast whose submission demands nothing in return, a creature corresponding perfectly, in other words, to what man is capable of giving.

We’re playing on the lakeshore. Aika has found a deer bone, and I’m throwing it for them. They never tire of bringing it back to me, they’d keep going till they dropped dead. These masters teach me to inhabit the only country worth living in: the moment. Man’s particular sin is to have lost this frenzy the dog has for retrieving the same bone. For us to be happy, we have to cram our homes with dozens of more and more sophisticated  objects. Advertising urges us to ‘Go fetch!’ The dog has admirably solved the problem of desire.

A long trek to South Cedar Cape with the little chaps. The wind has come up and the sky is in shreds. Shafts of sunlight strafe the taiga through the clouds with tawny streaks and stamp it with yokes of gold; sometimes the light strikes a section of mouldered cliff face, bathing it in brightness. Old ice faults can be treacherous where they haven’t refrozen solid, because the eye cannot gauge the thickness of the surface. The dogs stop short, whimpering, before an area gorged with water, and I must advance carefully to show them they can follow. An eagle wheels high overhead. The wind kicks up sheaves of spangles, which turn into pyrite dust when they hit a sunbeam. The forest grumbles at the gusts. Spring has marshalled its forces here; I feel them, ready to attack, not yet daring to retake the territory.

The sky is insane, in a fluster of fresh air, dazed with light. Images of intense beauty spring up – and vanish. Is that the apparition of a god? I’m incapable of taking the slightest photo, which would be a double offence: a sin of inattention and an insult to the moment.

When we reach the cape where I wanted to test the fishing, a little over six miles from the cabin, I don’t even have time to get out my ice drill. The enraged wind orders a retreat. I go home at a run, the dogs on my heels. We’re waylaid by some fierce blasts, which suck up particles of abrasive crystal. The dogs protect their noses with their forepaws. For two hours, we fight our way towards the cabin against an invisible hand.

Tomorrow is May Day. Will the traditional lilies-of-the-valley bloom on the taiga? 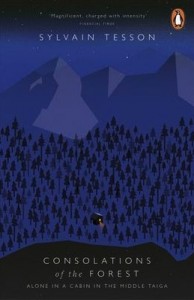 Extracted from Consolations of the Forest: Alone in a Cabin in the Middle Taiga by Sylvain Tesson. © Editions Gallimard, Paris, 2011; Translation © Linda Coverdale 2013.

Sylvain Tesson has been described by L’Express as “France’s most brilliant travel writer”. After a world tour by bicycle in 1993-94, he developed a passion for Central Asia, and in 1997 crossed the Himalayas on foot. For seven months in 2003, he followed the journey of escapees from the Gulag, which brought him to international prominence with his remarkable travelogue Axis of Wolf. Consolations of the Forest won the Prix Médicis in 2011.