Home  »  In the pub with Laidlaw
Tweet Pin It

In this passage from his first detective novel, ‘Laidlaw’, WILLIAM MCILVANNEY, whose back catalogue has recently been republished by Canongate, gives a fine lesson on how to create a sense of place

‘Over here a minute,’ Laidlaw said. They were at Glasgow Cross. After waiting a little while, they managed to get across the street to the pedestrian area in front of Krazy House. Laidlaw stopped before the small grey building Harkness had always assumed was on the site of the old Tolbooth – a kind of midget tower with a small balustrade at the top and above that the figure of a unicorn.

‘How about that?’ Laidlaw said.

Harkness read the words carved on the stone: ‘Nemo me impune lacessit.’ He knew it was Latin but didn’t know what it meant.

‘No one assails me with impunity,’ Laidlaw said. ‘Wha daur meddle wi me? Did you know that was there?’

‘I like the civic honesty of that.’ Laidlaw was smiling. ‘That’s the wee message carved on the heart of Glasgow. Visitors are advised not to be cheeky.’

The message gained force as they went beyond the Cross. At that point the Trongate divides into two streets running east, the Gallowgate on the north, London Road on the south. The sense of a choice is illusory. Both lead to the same waste of slum tenements hopefully punctuated with redevelopments, like ornamental fountains in a desert.

They walked along London Road and then into the area between it and Gallowgate, called Calton. Harkness felt what he always felt going east beyond the Cross, the sense of siege. Small shops and cafés had wire netting on their windows. Some pubs presented blank walls to the street with small, netted windows about ten feet above the ground. Bleak tenements mouldered among razed patches. And on the streets he saw too many of the walking wounded.

Laidlaw had been checking on a few pubs as he went, looking for somebody he called Wee Eck. As they walked, Laidlaw was talking.

‘Little Rhodesia,’ he had said.

‘A lot of this is John Rhodes territory. A kind of separate state. He did the U.D.I. before Ian Smith thought of it.’

‘All right. But I wouldn’t go into any of these pubs and spit on his name if I were you.’

The idea would have been much more bizarre to Harkness if he hadn’t been walking here when he heard it. It was the kind of place where someone alone would be very careful how he looked at people.

‘The rule of fear, is it?’ Harkness asked.

‘Not entirely. Although that’s a very intelligent response to have to John. But he’s more complicated than that. He does have certain rules. He’s not fair but he has a kind of justice. He could’ve been a much bigger crook. Only he won’t do certain things. So he’s settled for a level of crookery that still allows him the luxury of a morality.’

‘What kind of rules do you mean?’

‘Oh, too complicated for me to fathom. Only John and God know. And I think God’s pretty puzzled most of the time. Just trying to chat affably to John’s like walking through a mine-field. But I know the rules are there. I’ve caught the odd glimpse. Like I heard of a silly man who gave John cheek. And John took no steps.’

‘He was a civilian. John knows how special he is in that department. He knows a liberty when he sees one coming at him. And that’s just about everybody else. Another thing is, he never claims people in their houses. The wife and weans are sacrosanct with him. Sex is another thing. He’s about as permissive as John Knox.’

‘Let’s hope you can find out for yourself. Crash helmets on.’

They were at a pub which from the outside looked as inviting as a public toilet. The small windows, well above eye level, seemed suspicious of the daylight. The walls were rough grey plaster, obviously quite recently applied, not so much redecoration as refortification. The name along the top was from before, written in old-fashioned script, The Gay Laddie.

‘Do yourself a favour,’ Laidlaw said. ‘Don’t misinterpret the name.’

There was no danger. They went into more than a place. It was a precipitation of a way of life, the area they had walked in filtered through the old-fashioned swing doors and stylised in one room. Physically, it was a shrine to the Thirties, when the Depression had spawned the razor-slashers and brought King Billy of Bridgeton to prominence. The dominant fixture was wood, from the long, stained bar to the tables spread around the place. Here, Formica hadn’t been invented.

Just about as tangible as the furnishings, and sharing their unadaptable solidity, was the atmosphere. Being new to the atmosphere, Harkness found himself trying to define it. The tension you felt had nothing to do with potential criminality, the fear of robbery or mugging. It was much more immediate than that. It came from knowing at once that you were in the presence of a lot of physical pride, a crowd of it, so that you sensed the need to move carefully, in case you bumped an ego. This room was the resort of men who hadn’t much beyond a sense of themselves and weren’t inclined to have that sense diminished.

Harkness recognised a feeling he had experienced in other East-End pubs, and understood precisely where the tension came from. It came from the realisation that just by coming in you had shucked the protection of your social status. In this place your only credentials were yourself.

Three young men at the bar were busy establishing theirs. Each had a tartan shirt, a battledress-style denim jacket, wide trousers worn high and rubber-soled boots. It seemed to be the uniform of their private army, which was at the moment occupying The Gay Laddie with that youthful aggressiveness that spends a lot of its time advertising for trouble. They weren’t talking, they were broadcasting, and their bodies seemed to take up more room than they needed.

They were the focal point of the pub for Harkness. But Laidlaw saw them as peripheral, a bit of accidental tourism. Their careless provocativeness suggested to him they might have dropped in from a housing scheme on Saturn. He saw the heart of the place in the comparative quietness surrounding them, in the few others sitting at the tables and the one other man at the bar. He was someone whose name Laidlaw had never found out but he recognised him from the scar that ran down his left cheek and under the chin. 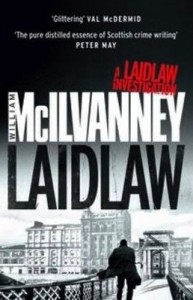 William McIlvanney won the Geoffrey Faber Memorial Prize with his first novel, Remedy is None, and the Whitbread Award for Fiction with Docherty. Laidlaw and The Papers of Tony Veitch both won Silver Daggers from the Crime Writers’ Association. Strange Loyalties, the third in the Laidlaw trilogy, won the People’s Prize, awarded by the Glasgow Herald. For more about his work, see personaldispatches.com.