Home  »  ‘In this light on this coast, everything started to suggest something else’
Tweet Pin It

In ‘The Summer Isles’, out this week in paperback, PHILIP MARSDEN sets sail up the western coasts of Ireland and Scotland for a small archipelago that he has long intended to visit. It’s a marvellous book about a story-filled seaboard; about ‘places drawn by longing and memory, places just beyond our reach, places that aren’t really there at all’. In this extract, he is off the south-west of Ireland, heading for the estuary of the River Shannon

I left Fenit, dropped the lines, motored out of the harbour. Coming round into Tralee Bay, I headed first south, then west before my bows settled just shy of north. There the sea and sky were sucked into the same hazy void. Some sixty or seventy miles inside it were the Aran Islands, which give even the Blaskets a good run in the myth-making stakes. I planned to break passage to them with a stop in the Shannon estuary.

Flicking on the autohelm, I went forward to sort out the cordage. In the gentle swell, I leaned against the mast, coiling and tidying, checking the sheets and a wear-mark that had appeared on the main halyard. The Kerry mountains filled the sky astern. For the next two hours, they grew no smaller. Their rocky contours softened and turned a paler blue, but their presence remained on the parapet of the horizon – Beenoskee, Stradbally and, largest of all, Mount Brandon.

Just inland were the Slieve Mish peaks. In the early Christian period, St Patrick came here with the warrior Caílte to bless the region and learn its dinnseanchas [a body of medieval literature that translates loosely as the ‘lore of high places’]. At that time, the fields were being stripped bare by flocks of birds and Caílte put a curse on those birds: ‘Rise up by the strength of this charm and spell, away onto the choice, blue-crested sea, so that each of you may kill the other and dust and ashes be made of you.’ And the two of them watched those birds rise from the fields and fly away to the west, out over the water where the rock on the shore is called the Rock of the Flock of Birds.

I passed close to another rock, the evil-looking Mucklaghmore, and it made me think of Judas in the Brendan story, clinging to his pole. In this light on this coast, through the hours of the morning, everything started to suggest something else. Staring at it, steering into it, did strange things to my perception. White without depth or edge, a white emptiness which dissolved the earth’s surface and its atmosphere, and tempered the hard borders of reason. I remembered a story told to Robin Flower on the Blaskets, of a church and churchyard floating up into the air and drifting off to look for a new site. In medieval Ireland, ships were often seen crossing the sky. At Clonmacnoise on the Shannon, a vessel once passed overhead and the monks spilled out of church to grab at its hanging anchor. High above them, they watched a sailor jump overboard and swim down to free it. The monks held the sailor. ‘For God’s sake,’ he cried, ‘let me go! You are drowning me.’

St Barra of Cork was once out at sea in a ship when he spotted St Scoithin having a walk. ‘How is it that you’re walking on the sea?’ Barra asked. ‘Because it is not the sea,’ explained Scoithin. ‘It’s a field.’ And he bent to pick a crimson flower. Barra, for his part, leaned down, scooped up a dripping salmon, and lobbed it to Scoithin. A similar story is told in the Immram Brain, the Voyage of Bran. Two days into his ocean passage to the otherworld, Bran spots a chariot coming towards him over the waves. It is driven by Manannán Mac Lir, God of the Sea, and he calls out in verse to Bran and his sailors:

What is a clear sea
For Bran’s skiff
Is a happy plain thick with flowers
To me in my wheeled chariot…
Speckled salmon leap from the womb
Of the white sea, on which you look
They are calves, they are coloured lambs.

Such stories are more than just picturesque. They’re subversions. They undermine those rules which appear to be most fixed – that what is heavy shall drop, what is land is solid, and what is sea is liquid. In political terms, they are the hopeful musings of people denied agency by a stifling priesthood and a harsh occupation. More universally, the tellings and retellings depend on the agreed nature of the otherworld, a place behind the surface of this one, where earthly constraints fall away. ‘Here all things are possible,’ wrote the Celtic scholar John Carey, ‘opposites can exist without conflict, essences and attributes can be isolated and transferred.’

In our empirical age, we have no more use for such notions. The otherworld doesn’t exist. Ships do not sail across the sky. Buildings tend to stick to their sites. If an island is not on the map, it isn’t anywhere. But such stories retain an appeal which is not merely aesthetic. They are a reminder that the way to understanding is not always linear, that the most improbable of paths can lead to the most rewarding of places, that the imagination is the oddest of human faculties, and also perhaps the greatest.

Morning slid into afternoon. The wind was a steady force three. A milky sunlight glimmered on the swells. Water trickled past the hull. I watched the drowsy outline of Kerry Head take form off the bows. Approaching it, I could see grass-covered slopes give way to cliff and a series of long steps that sloped down into the water. I watched the waves push up the rock, bursting against the risers in slow fountains of spray. High up on the headland was a single farm. What would it be like to live there, to work there in the wilder months, ambushed by wind at the end of the barns, balanced right on the edge of Europe?

The scale of the Shannon estuary itself seemed out of place. Its ten-mile-wide mouth should lead in to rainforests and tropical basins; instead it drains the soggy interior of Ireland. I met a man who’d been exploring its waterways in a boat not much smaller than Tsambika; it had taken him a whole summer, and still there were more. Here at the seaward end, Loop Head was a faint line to the north. Turning into the estuary, I freed off the sheets and headed north-east. For some time, the two shorelines hardly converged. I pictured my tiny sail from above, a lone piece of zooplankton flowing into the mouth of a whale. 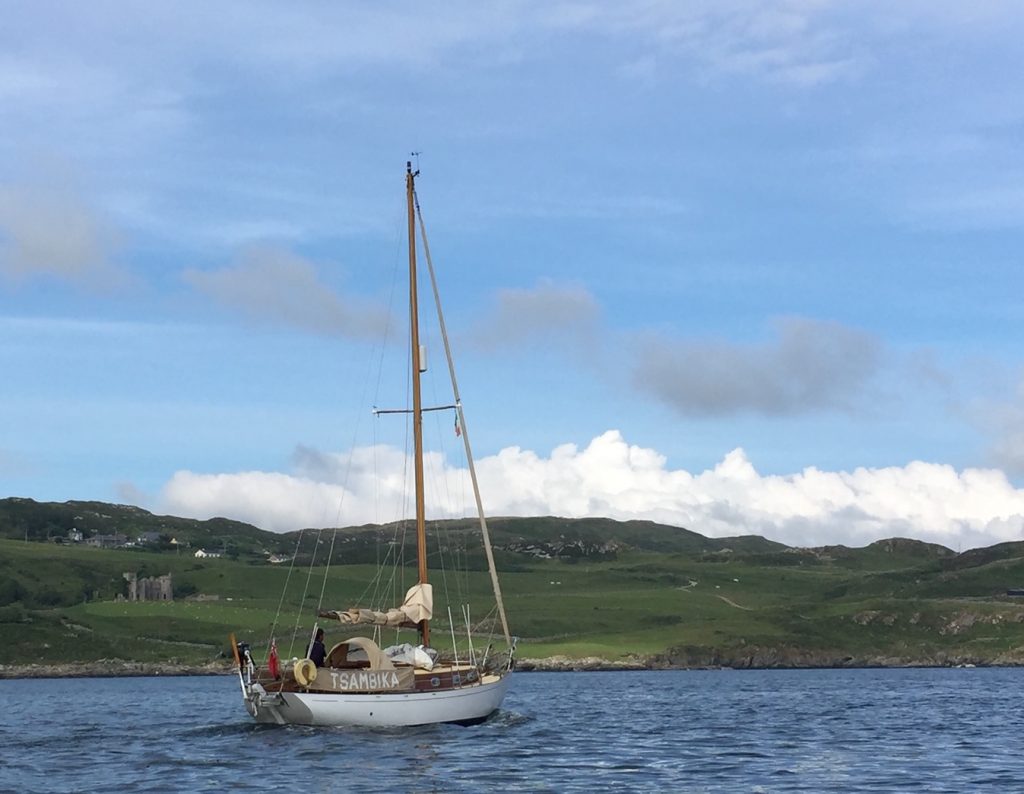 Philip Marsden heads for Clifden, on the west coast of Ireland, with the ruins of Clifden Castle in the background. PICTURE: PETER VINE

Somewhere here is believed to be a submarine province called Little Limerick. From time to time, reports have been made about the tide shoaling around submerged church towers and steeples. The sounds of tolling bells, of cattle and sheep were sometimes heard from deep underwater, also the smell of wild flowers. But for anyone who noticed them, it was a great misfortune. In 1823, Little Limerick was spotted from a boat, a thing of wonder beneath the waves. All fifteen people on board saw it, were amazed by the subaqueous shimmer of its buildings, and all fifteen people died. They were last seen solemnly filing up from the shoreline and into church. While imaginary places out at sea tend to be places of plenty, blessed or filled with fruit and happiness, those closer to land are more dangerous. Wonders lie in the distance, threats are closer to shore. So it is with the sea itself.

I needed to concentrate now, to come into harbour. I left the main estuary and followed a tight channel which dog-legged to the east and ended up at a lock-gate. A lock! As I approached, the outer doors swung open. I nosed in between them, and cut the throttle.

‘You’re all right there!’ From the window of the control tower leaned the head of the lock-keeper.

I jumped onto the platform, secured the stern, then went forward to fix the bow.

‘You come from the south?’ he called.

‘What you make, three hours from Kerry Head?’ He’d begun to close the gate behind me.

‘About that!’ I was watching the boat, trying to work out what was going to move against what.

A final whirring and clunk… The seaward doors closed. The lock-keeper began to activate the inner set, and their jaws parted. A vertical trickle of water appeared first; then, as the gap widened, came a silent surging of eddies and mounding water. The hull rose, and the platform too, clanking up its piles. The new water was the colour of milkless tea. It gave off a smell that was unfamiliar – not the salty tang of the harbours I’d been in, but something softer. It was the vegetable smell of compost and peat, the smell of the land.

The lock-keeper was pointing to the inner harbour. ‘Go past the first ope there – take one of the finger pontoons. Any of them’s fine.’

‘Don’t worry – I’ll find you.’ There was a heavy sound as the gates creaked shut. ‘You’re my prisoner now!’

© Philip Marsden 2019
Extracted from The Summer Isles: A Voyage of the Imagination (Granta, £9.99).
Philip Marsden is the award-winning author of many works of travel writing and non-fiction, including most recently Rising Ground, The Levelling Sea and The Barefoot Emperor, and a novel, The Main Cages. His work has been translated into 15 languages. He is a Fellow of the Royal Society of Literature and lives with his family in Cornwall.