The human come back to the bird colony
with plastic, fizzy drinks, scraps of fabric,
with air-filled rubber, naked offspring –
all their gull shrieks translated to Italian.

We’re good at being crowds.
Some sixth sense guides us through the concourse;
we pack the terraces, or floor by floor evacuate
the tower block to gossip in the forecourt.

of burning sand to somehow fit a towel,
to plant the lounger and umbrella.
Two pedalos hired; beers; and Grandpa
with cigar is parked beside the cooler.

And though wrong-doing’s infinite
(it’s every man for himself in a predatory world)
the sun’s decreed an amnesty,
another summer of love and ice cream.

Some voyeurism, some thievery. Keep an eye
on that Rolex: we’re all sinners, but none gets knifed
or trampled, the child in difficulties will be saved,
then mobbed by a dozen flapping mamas.

becomes a solid mass where goodness spreads
through the contagion of common needs.
Here, take my sunscreen. Caro mio, your ball back!
Here are my nice breasts to look at.

And here we are ourselves with scarce
six words between us, taking our bearings
from mile on mile of swingball, water pistols, Ray-Bans,
hour on hour without a thought to cloud

the blue, as we negotiate legs and lilos,
tiptoe through the simmering oiled pulchritude
to dip from time to time into the Adriatic,
swimming far out to prove its cold. 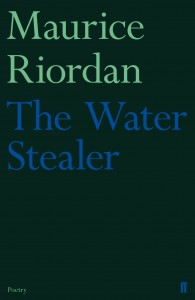 Maurice Riordan, editor of Poetry Review, was born in 1953 in Lisgoold, Co. Cork. His first collection, A Word from the Loki (1995), was nominated for the T S Eliot Prize. Floods (2000) was a Book of the Year in both The Sunday Times and The Irish Times and The Holy Land (2007) won the Michael Hartnett Award. Maurice Riordan lives in London, has taught at Imperial College and Goldsmiths College, and is currently professor of poetry at Sheffield Hallam University. The Water Stealer has been shortlisted for the 2013 T S Eliot Prize.