Home  »  ‘Wales, a place I had never been before in my life, appeared deeply familiar’
Tweet Pin It

Why, a reviewer once asked, is the American writer PAMELA PETRO so obsessed with Wales? In ‘The Long Field’, published this week, Petro provides the answer. The book, her fourth, is one she’s been thinking about for 30 years and writing seriously for the past seven. It’s both a memoir and and an exploration of hiraeth — a Welsh word for longing for all you can’t have. In it, she weaves together the essential hiraeth stories of Wales with aspects of her own life: as a gay woman, as the survivor of a train crash, as the daughter of a parent with dementia. It’s both a wonderfully absorbing meditation on the meaning of home and place and a love letter to Wales. The following extract is from the prologue… 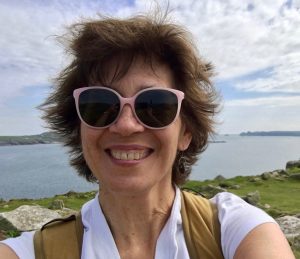 Welsh time first began adding up when I enrolled at St David’s University College, the smallest university in Britain, in a master’s degree programme that studied words and images from illuminated manuscripts to movies. The course was the only thing that brought me to Wales. My heritage is mainly Eastern and Central European, and I grew up in New Jersey, which is just about as far from Wales as you can get. I wasn’t looking for roots.

St David’s College and its host town of Lampeter were both so tiny I could stand in the centre of campus and hear sheep bleat. A sign in the window of the local beauty shop – ‘Are your sheep and goods properly tagged?’ – reflected local concerns. There was no suburb, call it, between the life of the mind and the facts of the earth. I learned post-structural theory and how to dip a sheep. I learned the iconography of medieval art and how to pull a pint, never to leave a farm gate open, never to pour loose tea leaves into rural plumbing. The days became like charged electrons jumping between atoms of learning, lived experience, and creative invention. It was a good time to be twenty-three, with a fast metabolism and far from home.

I look back on those early days in Lampeter and remember a tree permanently sprouting green leaves on one side and flames on the other. I remember waking to a banging on my cottage door in the middle of the night – a friend wanting to go to the sea. Driving there, luminous breakers silver in fickle starlight, racing too fast down the beach, falling, catching each other and kneeling together in the winter surf like two freed sacrifices.

These images crowd side by side in my memory, but only one emerged from life – the other belongs to Wales’s folk remembrance of its Celtic-inspired, magic tales of the early Middle Ages. Strangeness was never confined to the pages.

A hill behind campus called Llety Twppa, perfectly bald but for a dense ring of trees on its crown. A living, green mushroom cloud.

Immense, 10pm shadows in summer, groping across fields from windbreaks backlit by a ball of sunfire. The sensation of slipping quietly from one day into another without Time noticing.

Exhaling in winter on a moist country lane at the very moment the sky bled scarlet, startled to my bones to think that my breath had turned pink.

Decades after I’d received my degree, my dad had a stroke that left him with Charles Bonnet Syndrome. He lost the peripheral vision in his left eye, but his brain refused to accept it. Frustrated by the lack of sensory input, it began randomly snatching up image-memories and sticking them where visual data should’ve been. We’d be sitting in the sunroom in New Jersey and my dad would say, ‘Well, John just walked out of the wall again.’ John was his younger brother who had been dead the past ten years.

At first we thought he was hallucinating, but then we realised that John and lions and neighbours were always walking out of the left-hand wall, and Charles Bonnet Syndrome was eventually diagnosed. Despite being impaired by the stroke, my 86-year-old pop kept his sense of humour and made the most of his condition.

‘Go find a physicist,’ he’d instruct, ‘and ask him how come I can generate my own fifth dimension somewhere between time and space.’

Whenever he said that – and he said it pretty often – I was pitched back in memory to that first year in Wales, seduced over and over by my own dimensional wormholes. My brain, too, had seemed to be panning for memories that it superimposed atop the landscape. And they were memories, but they were memories of places that until then I’d only seen in my imagination. Now, for the first time, they were in front of my eyes. My ‘memories’ were the landscape.

There’s no other way to say it: Wales, a place I had never been before in my life, appeared deeply familiar to me when my parents dropped me off in Lampeter in 1983. The landscape made sense. I recognised it. We’d made a road trip around England and southern Scotland on our way to Wales and I hadn’t felt this way, so it came as a pretty big shock.

Gillian Clarke is the former National Poet of Wales. She once told me that I needed to learn the word cynefin. (Pronounce it Kun-EV-in. In Welsh a single ‘f’ is pronounced as a ‘v’ – it takes two f’s to make the noise in ‘fierce’ – and the emphasis is always on the penultimate syllable. Even speaking English the Welsh favour the second-to-last sound. I love the soft way they skid into ‘seven,’ pronouncing it SEV-un, dragging out the ‘ev’ and swallowing the ‘un.’ When they say that I hear the tide receding.)

Gillian wrote in an email, ‘Cynefin is the word used for the way a sheep passes on to her lamb, generation after generation, the knowledge of the mountain, the exact part of the mountain that is hers.’ I understood why that would be important to the lamb, but not to me. Then Gillian continued. ‘Or it can mean that sudden sense you have that you belong to this particular place though you may never have set foot in it before.’

Now I got it. Cynefin gave a name to that liminal space between the external world and the interior imagination.

The first time in Lampeter that I walked past the edge of town, where the double yellow ‘no parking’ lines ended and sheep pastures began, I found myself nodding, as if I were in agreement with the landscape. Its lucidity cut like a scalpel through mental images of all the other places I’d lived. New Jersey, Rhode Island, Washington DC, Cape Cod, France. It sliced through their forests and highways and towns and cities and clutter, peeling them away, down to the mental bedrock beneath – a primary place of understanding where memory and concept conjoin. And that place looked like Wales.

Wales is not ‘treed’ the way the United States is. As in most of Britain, large-scale clearances of native woodlands had begun as early as the late Neolithic period. By the year 1000, only about 20 per cent of Wales remained covered in forest, and just 150 years after that, the landscape had become almost entirely open farmland pocked by stands of woodlands, rather than the other way around. As a result, today there is very little opportunistic or random growth on view. Nearly every tree you see is the result of a human thought process; the landscape is crowded with decisions. For better or for worse, the Welsh hills are shorn and the horizon is as far away as eyesight and topography allow.

Nor does West Wales have many clusters of large buildings – surely no conurbations – so nothing escapes the holistic glance. You can see geography adding up before your eyes, like a great equation. How the earth was made, how each hill ribbons down to each glacial valley, how each valley ribbons up to the next hill. Here in this green clarity I saw something I’d never seen before. I didn’t just see land, I saw ‘scape’ – meaning ‘something … exhibiting or embodying a quality or state’. Distinct and discreet elements coming together to make a whole. The anchored equivalent of what I’d first noticed in the Welsh sky. In other words, the notion of a place as a totality, as the sum of its parts, its geology, its climate, its human decisions and history. I saw the abstract idea of home.

Every component played a role. Inside the treelessness, dark windbreaks marking a field’s edge. A blur of sheep herded by dogs, moving across a hillside. Shadowed headlands outlining the coast. Rivers sculpting, glinting, s-curving through valleys. Heavy clouds casting shadows on the earth. Distant villages cupped in a valley. All these elements – some resulting from human decision-making, others revealing the trespass of glaciers – underlined and highlighted the landscape like markers in a geology text, and together they became symbols on the legend of my life. I felt I’d found the key to a map I’d carried in my head since I was a little girl but had never before been able to read. And until I could read that map, I’d had no sense of my or my species’ place on the planet.

As the writer and mountaineer Jim Perrin has said of the rough, high headlands and gentle bays of the Llŷn Peninsula in North Wales, ‘there is something here that is more than landscape, and comprises a part of my knowledge of how the world is.’ That’s how I felt – and still feel – about the West Walian landscape around Lampeter.

The 400-million-year-old Silurian mud and sandstones of West Wales were as familiar to me as my own memories, although I’d never seen them before. To find out, now, thirty-odd years later, that Welsh has a word for this kind of discovery – what the novelist Josephine Hart calls ‘the shock of recognition’ of finding your ‘internal landscape, a geography of the soul’ as a point on the map – feels both astonishing and very right. It’s not like déjà-vu, which stresses repetition more than recognition. Cynefin emphasises place and belonging – a mental map fitting seamlessly atop a previously unencountered landscape. It casts importance equally on the exterior world and the interior imagination. That it was necessary for Welsh, one of the oldest languages in Europe, to create a word for this phenomenon hints at something suggestive and singular about this place.

Extracted from The Long Field by Pamela Petro (Little Toller, £20)

Pamela Petro is the author of three previous creative non-fiction books, including Travels in an Old Tongue: Touring the World Speaking Welsh. She is a Fellow at the University of Wales, Trinity St David, where she directs the Dylan Thomas Summer School in Creative Writing. She is also a photographer and word-and-image artist. She teaches creative non-fiction and the graphic novel to undergraduate and postgraduate students in the US, and holds a BA from Brown University and an MA from the University of Wales. For more about her work, see her website.