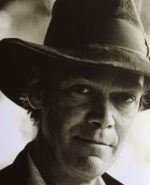 ‘Coasting’, a penetrating dissection of Britain and the British at the time of the Falklands War, is one of five books by JONATHAN RABAN that have just been reissued by Eland Publishing. In this extract, Raban, off Devon in his 30-foot ketch, finds himself at the centre of the universe

Everyone was embarking for somewhere. On the rising tide I rowed the dinghy up into the village and loaded it with pacific supplies like bags of charcoal for the stove, new wick for the lamps, a mackerel line and, in case the mackerel line came to no good, some tinned sardines and steak-and-kidney pies. At midday I embarked for — I wasn’t sure where. I crept as quietly as I could, with the engine keeping up a stream of warlike remarks, down the Yealm into a brisk blue day on the open sea.

I had been single-handedly in charge of the boat for less than a week, and was shivering with adrenalin and nerves. I checked the shrouds overhead to see they were clear, wound up the heavy sails on their winches, tidied the foredeck, wrapped ropes round cleats, until the whole boat was tuned and taut, braced against the wind and ploughing splashily ahead. She did not sail like a yacht: her trawler hull drove heavily, bullishly, through the water, shouldering it aside and raising plumes of sunlit spray over the bows. She didn’t so much lean to the wind as yield to it unwillingly, exposing as little of her hull below the waterline as she possibly could.

With the reactionary engine shut down, I listened apprehensively to every sound in the sudden quiet. Ropes creaked and banged in their wooden blocks. The freshwater supply slopped and gurgled in the fifty-gallon tank under the cockpit. The chains of the steering gear rumbled with every small adjustment to the wheel. The short sharp waves marched steadily alongside, breaking against the hull in a continuous low hiss. Once, I caught the noise of an intruder’s footsteps, but it was only the rhythmical flop-flop-flop of loosely packed books in the saloon shelves.

Gosfield Maid lumbered along under sail at about four sea miles an hour, but it felt as fast and heart-in-mouth as flying, with the water foaming past under the gunwale and the boat’s wake breaking up behind her like a jet trail. I was utterly absorbed in the anxious business of simply staying afloat, living from moment to moment and from wave to wave.

Anxiety kept me very much busier than I need have been. I was frightened that the compass was wrong, that the tidal current would carry the boat miles off course, that fog would come down, that I’d lose my landmarks, that the wind would blow up into a gale, that I’d spring a leak — that, somehow or other, this intense, private, scarifying pleasure was eventually bound to turn into a string of bubbles.

I had the floorboards up to check the bilges. They were dry. Were they too dry? I blackened the chart with crosses, and kept on dashing out into the cockpit with the hand-bearing compass to see if Bolt Head and Prawle Point were still where I’d last left them, or whether they’d made a break for it and escaped over the horizon. From three miles off, the Devon coast was still winter-brown in the April sun; its headlands, cliffs and outlying rocks looked like a crumbled and half-eaten fruit cake on the edge of the sea.

The egotism of a man by himself in a boat is bolstered by everything that he can see. Out on the water, you are the centrifugal point of the world through which you move, carrying the great disc of your horizon with you as you go. The first lessons in navigation entail an almost-scientific proof of the magnificent fallacy that the universe has been constructed for your convenience alone.

Bolt Head and Prawle Point are important for their relative bearings — their bearings in relation to you, which alter with every move that you make over the sea floor. The land in general turns into a wonderfully protean material: cliffs slide in and out from behind each other; new hills slowly enfold themselves round cities; houses and trees wander about the landscape, meeting and separating, while you stay fixed on your own lumpy patch of water.

This is just a prelude to the higher egotism yet to come. I had on board a sextant which I meant to learn to use sometime, together with Maria Blewitt’s Celestial Navigation for Yachtsmen. The book began by sketching out an intoxicating fiction:

We navigate by means of the Sun, the Moon, the planets and the stars. Forget the Earth spinning round the Sun with the motionless stars infinite distances away, and imagine that the Earth is the centre of the universe and that all the heavenly bodies circle slowly round us, the stars keeping their relative positions while the Sun, Moon and planets change their positions in relation to each other and to the stars. This pre-Copernican outlook comes easily as we watch the heavenly bodies rise and set, and is a help in practical navigation.

Forget Copernicus? I had spent my life trying, pretty much in vain, to remember Copernicus. I was delighted by this navigator’s view of the universe, in which everything was just as it seemed to be, with the sun, moon and stars as mere satellites, tastefully disposed about the globe, and man the navigator at the epicentre of the whole ingenious piece of clockwork. Geocentric and egocentric are one small typing error apart; in celestial navigation, I had at last hit on a cosmology I could live with.

‘Sometime, old boy,’ my father said, ‘you’re going to have to learn that the world does not revolve around you.’

Thirty years on, I was learning the very opposite. With the headlands changing places and the sun going west, the world was turning round the axis of Gosfield Maid and I was back to Ptolemy.

Far out on the rim of the world, and in some danger of dropping off it altogether, there was the faint angular silhouette of an enormous ship. I couldn’t tell what it was — maybe an aircraft carrier, maybe a cruiser, but it looked big, naval and Falklands-bound. Seen from the centre of things, its distant shadow was comfortingly insubstantial, anyway; an irrelevant distraction from the really important business of ropes, compass points and log readings.

I had never known a privacy so deep and self-contained as this. It was temporary and spiced with fright. It was bounded by Devonshire on one side and the task force on the other, but for the moment at least it felt absolute: an isolation, and an equilibrium, often dreamed of but never experienced till now. Lurching airborne through the sea, with lots of sunshine, a good library and the kettle just coming to the boil, I thought: I wouldn’t half mind spending eternity along these lines.

But the wind was fading and Gosfield Maid was down to three knots, then two and a half, against a foul tide that was picking up in speed as the English Channel tried to empty itself into the Atlantic Ocean. Off Start Point, twenty-four miles and seven hours out of the Yealm, I gave in and got the engine going. It came to life with a burst of patriotic blather.

The sea here was suddenly troublesome. Stan Point sticks out into the tidal stream, a mile-long breakwater of solid granite. When the tide is running, it piles up against the headland and pours round its end in a confused mass of white water — eddies, whirlpools, and frothy, pyramid-shaped waves. When a strong wind blows against the grain of the tide, the place is dangerous, a sickening switchback ride over an indignant and frustrated sea which will do its best to spit you out and suck you down at the same time.

There wasn’t enough wind to do that today, but there was a broad stretch of water ahead, rippling, off-white, like a field of grazing sheep. As soon as it came into sight, the boat began to slew and stumble through the waves, even though their tops were barely breaking. Following the instructions in the pilot book, I tucked myself in within a half mile of the shore, waited until the lighthouse shifted round from northeast, through north, to north-northwest, and steered for it, aiming to shave past the rock with fifty yards or less to spare.

All tide races are supposed to have an ‘inside passage’ — a ribbon of water close inshore through which you can sneak past the race without getting caught in it. These inside passages only exist in the right weather. Some are just diluted versions of the turmoil to seaward. Some are avenues of calm as wide as the Champs-Elysées, others are narrow alleys in which a boat is squeezed tight between the race and the rocks. They are all places where your heart quickens and you keep your fingers crossed as you go in.

The inside passage round Start Point was there that evening — a broad, sluggish channel, its seaward bank marked by a ragged line of scum. It led into what was left of the sunset; a few low cloud banks smeared with ochre and mauve. Everything was darkening fast: Start Bay was turning to a lake of ink and lights were coming on in the straggle of villages along the shore. I steered for the fading obelisk on the hill over the entrance to the River Dart until I lost it in the dowdy sky. Then there was just a confusion of coloured lights. Crab boats, returning to the river at different angles, showed as winking dots of red, white and green. The trouble was that the rest of the world was afloat too. Pubs, cars, lamp-posts and front rooms were bobbing about among the crabbers. Observing the international collision regulations, I gave way indiscriminately to nursing homes, Volvos, bungalows and guest houses as they steamed past my bows, before I found the metrical flash of the Kingswear light, which guided me into the river between a pair of invisible castles.

By night, Dartmouth was a dazzling incandescent city. It blazed on the water, a mile-long pool of blinding reflections so hard and bright that you could nearly hear them clink. They shattered and regrouped in the criss-cross wakes of fishing boats and ferries — a Manhattan of lights on the hop. I left Gosfield Maid chained to a buoy in midstream, rowed through the middle of the loud reflections, found a seafood restaurant on the waterfront and basked in my luck at happening on such unexpected splendour.

But day broke on Boots the Chemists and on Barclays Bank. It disclosed an English seaside town, bunched and squat, with too much pastel pebbledash and too much teashoppe half-timbering. The jam of traffic on the streets was as quiet as sludge, patiently shifting, a few feet at a time, through narrow conduits of low brick villas and tall advertisements for low-tar cigarettes. On a green hill of razored lawns to the north of the town, the Britannia Royal Naval College lorded it over Dartmouth. I studied it through binoculars. No one seemed to be at home, although some wheeled cannons were parked on the gravel near the front door. The college didn’t look a very friendly place. Its bland white façade and banks of bare uncurtained windows gave it the supercilious expression of an officer staring fixedly over the tops of the heads of the Other Ranks. Searching the grounds, I found a gardener marching a motor mower uphill, another cannon, pointed strategically at Marks & Spencer’s in the town, a bed of obedient and well-drilled roses, a blue naval Land-Rover and a horse. Perhaps everyone had gone to the Falklands.