‘Lands of Lost Borders’, a critically acclaimed account by KATE HARRIS of cycling the Silk Road with a childhood friend, this week won the C$30,000 RBC Taylor Prize for non-fiction in her native Canada. In this extract, Harris reports from a two-lane road ‘that twisted and stretched like black taffy across Azerbaijan’ 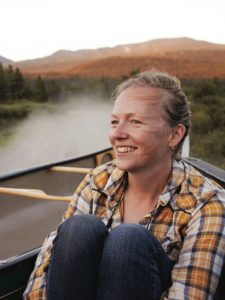 The farther we pedalled east, the warmer it was when we woke up each morning, as though we were biking closer and closer to the sun. Every little town seemed more prosperous than the last, their streets lined with cellphone shops and Internet cafés, though the land beyond them quickly reverted to meadows and forests. Always to our left was the Greater Caucasus range, where mountains sleeved in ice held up the deep blue sky. Despite the region’s conflicts ancient and ongoing, despite its having the longest history of human habitation outside of Africa, it was sometimes hard to tell where wilderness began and ended in Azerbaijan — with the exception, that is, of the country’s designated roadside picnic areas.

Judging by how often these rest stops were packed with Azeri families, it seemed that picnicking in the sunshine was a popular pastime. With their cemented walkways, shin-high metal fences, overgrown lawns, and flowers wilting in concrete pots, the rest stops didn’t exactly scream natural splendour, but at least they encouraged people to linger outdoors and appreciate the fresh air. Besides, the historian William Cronon argues that there is nothing “natural” about wilderness, that it is a deeply human construct, “the creation of very particular human cultures at very particular moments in human history.” Though I might be appalled by Marco Polo’s failure to swoon at mountains and deserts along the Silk Road, wilderness in his day implied all that was dark and devilish beyond the garden walls. The fact that I’m charmed by the shifting sands of the Taklamakan Desert and the breathtaking expanse of the Tibetan Plateau doesn’t mean I’m more enlightened than Polo, more capable of wonder. It means I hail from a day and age — and a country and culture — so privileged, so assiduously comfortable, that risk and hardship hold rapturous appeal.

It probably also means I read too much Thoreau as a teenager. “In wildness is the preservation of the world,” he wrote, priming me to pine after places as far away from Ballinafad [her childhood home in Ontario] as possible, like Tibet and Mars. Provoking such distant wanderlust was hardly Thoreau’s fault or intention — he himself never travelled beyond North America — but I enthusiastically misread him, conflating wildness with wilderness, substituting a type of place for a state of mind. Cronon finds the whole concept of wilderness troubling for how, among other things, it applies almost exclusively to remote, unpopulated landscapes, fetishizing the exotic at the expense of the everyday, as though nature exists only where humans are not. This language sets up a potentially insidious dualism, for if people see themselves as distinct and separate from the natural world, they believe they risk nothing in destroying it. What Thoreau was really saying was that he’d travelled wildly in Concord, that you can travel wildly just about anywhere. The wildness of a place or experience isn’t in the place or experience, necessarily, but in you — your capacity to see it, feel it. In that sense, biking the Silk Road is an exercise in calibration. Anyone can recognize wildness on the Tibetan Plateau; the challenge is perceiving it in a roadside picnic area in Azerbaijan.

By late afternoon these rest stops were generally empty. We pitched our tent in one on the way to Baku, but the lawn was so uneven we had to patch the holes in it with socks and underwear so the sleeping bags would lie flat. Using a concrete picnic table as a kitchen counter, Mel and I prepared our blandest meal yet, plain noodles mixed with flavourless flecks of corn from a soup mix. As I tried to pull the concrete bench closer to the table, for they were placed an awkward distance apart, I realized that these picnic areas, however neat and delimited, still hinted at the deep connectedness of all things: the bench wouldn’t budge, being firmly anchored to the earth. “When we try to pick out anything by itself,” observed John Muir, “we find it hitched to everything else in the universe.”

© Kate Harris 2018
Extracted from Lands of Lost Borders: A Journey on the Silk Road, which is published in Britain by HarperCollins (£20). The book, Kate Harris’s first, won the Banff Mountain Book Award for Adventure Travel and has just won (March 4, 2019) the RBC Taylor Prize for Canadian literary non-fiction.
The author’s award-winning nature and travel writing has been cited in the anthologies The Best American Essays and The Best American Travel Writing and featured in The Walrus, Canadian Geographic, The Georgia Review and Outside magazine. For more about her work, see her website.