Home  »  A story about cheese – and storytelling
Tweet Pin It

The Telling Room: Passion, revenge and life in a Spanish village
by Michael Paterniti
(Canongate) 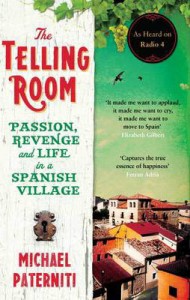 The conventions of flit lit are well established. The expat writer, having had a holiday in a village in Spain, France or Italy, returns for a longer stay. He means to live as simply as the locals, so having bought a shepherd’s hut or blacksmith’s forge he adds no more than solar panels on the roof, and heating under the floor, and a power shower and a super-fast broadband connection.

The plan is to escape the pressures of the 21st century, farm pigs, sheep or oranges, chronicle the daily round in his new home and make envious the e-book-reading commuters in his old one. The locals will provide a cast of characters to be celebrated and (but only  “affectionately”) laughed at.

The Telling Room, though, is something of a departure from the genre (as you might expect from a writer whose last book was about driving around America with Einstein’s brain). Paterniti doesn’t renovate, doesn’t farm and, far from producing a book every couple of years, takes a decade to write one, during which time his family, shuttling between Spain and the United States, grows from three to five. This is  because, far from sending up  the locals, he erects a statue to one of them and then can’t see round it.

At the start of the book, Paterniti is editing a newsletter for a deli in Ann Arbor, Michigan, supplementing his earnings as an assistant on a creative-writing course, when he reads his boss’s notes about a cheese from Castile: a sublime cheese, one that’s expensive, but justifiably so, because it’s “made with love”. He’s taken with the story, but can’t even afford to taste the cheese.

Nine years pass, during which Paterniti becomes an accomplished writer of narrative non-fiction for magazines, with a gift for turning nouns into verbs (in this book, a map “accordioned”, a road “wishboned”, a lawyer “triaged the emergencies of the day”). Having a clear-out, he finds those notes again and discovers that the cheesemaker, though his produce has found favour with everyone from the King of Spain to the buyers for Harrods, is no longer making it himself. Why? Paterniti thinks there might be a book in the answer to that question. So he sets off for six months with his wife and baby son to the village of Guzmán, high on the meseta of Castile, a place, as the poet Antonio Machado has it, of “sad and noble high plains, wastelands and stone”.

Ambrosio, the wonderfully named cheesemaker, admits Paterniti into his circle of friends, his family and his contador: the cave-top room where wine and cheese were tallied and which has since become a setting for drinking and storytelling – hence “the telling room”. Ambrosio is a man with both a big heart and a dominating presence; a man who finds “immeasurable glory in riding a tractor” and can convince his listener to do the same.

The slow-food fable that captivated Paterniti at the start has turned sour, all because the cheese-maker has been betrayed by a lifelong friend. That, at least, is Ambrosio’s account, and Paterniti finds it hard to challenge. Hard because at first he sees everything Ambrosio’s way, and then hard because, having become Ambrosio’s friend, he doesn’t want to become his enemy (not least, perhaps, because Ambrosio has detailed the brutal ways in which he plans to exact revenge on his first betrayer).

This, then, is a tale of food and feuding, one in which the reader learns quite a lot about cheese-making in Guzmán and the history and traditions of Castile. Much of that learning is imparted in ever more elaborate footnotes, as if Paterniti, with Ambrosio sitting on top of him directing one book, is trying to wriggle out from under him and write another. It’s a story about telling stories; about the dangers of trying to be the 81st citizen of an 80-person village and a reliable reporter at the same time.