Long lists were announced today — World Environment Day — for the Wainwright Prize, for UK-based books on nature, and for a new Wainwright Prize for writing on global conservation.

The lockdown is being eased, whether wisely or not, so the page of literary escapes I’ve been compiling recently for Telegraph Travel has come to an end. The last one, which appeared in print on Saturday, included an extract from Nicolas Bouvier’s classic The Way of the World (Eland), plus journeys in the sky from writers as various as Antoine de Saint-Exupéry and Rebecca Loncraine.

In this week’s free lecture from the archives of the Royal Geographical Society, Adam Weymouth talks about the 2,000-mile canoe journey he made to write his acclaimed debut, Kings of the Yukon: An Alaskan River Journey (now in Penguin paperback).

Sybille Bedford (1911-2006), who was a travel writer as well as a novelist, a biographer and a journalist who wrote about criminals and miscarriages of justice, was celebrated yesterday in the Great Lives slot on Radio 4 (due to be broadcast again on Friday at 11pm).

Bedford was nominated by the travel writer Sara Wheeler, who described her as “a dazzling writer and a free spirit [who] had a damn good time while she was about it”. Wheeler was in her twenties when she first encountered Bedford’s writing, in an account of her travels in Mexico, A Visit to Don Otavio. You can read an extract from that book on Telegraph Travel; it was part of a page I compiled recently that was designed to offer some literary release from the lockdown.

Happy reading to my four competition winners, who will each be receiving a copy of James Attlee’s Isolarion. They are: Neal Brown, J Cavanagh, John Wyatt-Clarke and Rob Jones. Thanks again to the publisher, And Other Stories, for putting up the prize. And thanks, too, to James Attlee, who has reminded us (usefully, in these times) that you don’t have to go to the ends of the earth to write an original book about a journey.

And Other Stories, which is based in Sheffield, is a not-for-profit private company that aims to publish “innovative contemporary writing from around the world”. It does sell its books through shops, but it’s the support of subscribers that makes the books happen. It now has about 1,400 in more than 40 countries, receiving up to six books a year. During the Covid-19 crisis, it is doing what it can to support bookshops: 20 per cent of the price of each new subscription will be donated to the bookshop of your choice. For details, see the company’s website.

Fancy lighting out for the Amazon? You won’t need to go near an airport, never mind wear a mask. All you’ll need is a connection to YouTube and a pair of headphones. Simon McBurney’s one-man show The Encounter, which I saw at the Barbican in London in 2016, is online until May 22. I worried it would be a huge disappointment after the stage version, but I dipped in for 45 minutes and it’s astoundingly good even on a desktop in daytime. I’d forgotten how funny the preamble was, and there’s a haircut joke that now seems made for our locked-down times. I’m going to watch the whole thing again on a big screen, in a darkened room, this evening.

In a fond and funny piece in The New Yorker, Anthony Lane, who took to the rails just before the global lockdown, celebrates the enduring romance of the sleeper:

Although it is unlikely, as you clatter through the night, that anything of note will befall you, the prospect that it could feels ever present, just out of sight beyond the next curve of the track. To remain awake to that possibility, even as we’re meant to be sleeping, is the privilege that beckons some of us back, year after year, to this awkward and beguiling locomotion.

I compiled another page at the weekend for Telegraph Travel designed to offer some literary release from lockdown. The lead was an extract from Julian Sayarer’s new book about cycling through Israel and Palestine, Fifty Miles Wide (Arcadia Books). Sayarer conveys powerfully what life is like for people on both sides of what he calls “the world’s most entrenched impasse”. At the same time, his book is full of free spirits, and the joys of free-wheeling.

When I key in the title of the latest book from James Attlee, the spell-checker built into my software corrects it. The spell-checker wants to make it Isolation. The proper title is Isolarion. It’s the term for a 15th-century map that isolates an area to present it in detail — and in that detail finds a greater truth.

Both the spell-checker and the book — which has just been reissued in a new edition by the innovative publisher And Other Stories — seem in tune with our strange times. At the moment, none us can roam as readily or as far as we used to. Some of us can’t leave home at all. Many of us are attending more closely to what’s immediately around us, and seeing it afresh — just as Attlee, like an urban Gilbert White, does in Isolarion.

White, a country boy who went to Oxford, became the founding father of nature writing partly by adjusting to his environment. He had become a priest and was tied to a Hampshire parish; he was missing his peers, but because coach travel made him sick he couldn’t stray far. Those constraints and tensions contributed to The Natural History of Selborne (1789). As Richard Mabey, that modern-day green man, has observed*, “While Joseph Banks was exploring on the other side of the globe, [White] was out with a lantern, counting earthworms on his back lawn. White’s achievements were partly the result of using these constraints as creative opportunities. Emotionally and intellectually, he hunkered down in Selborne, and joined the world outside through writing.”

Attlee does the same with Isolarion. When he wrote it he was itching to travel, but couldn’t find the time. There were “mouths to feed, bills to pay, deadlines to meet”. Then it dawned on him that the voyage he needed to make began a few minutes’ walk from his own front door in Oxford. Out there was the Cowley Road, lined with businesses that seemed to represent every nation on earth: from a Jamaican restaurant, via a Ghanaian fishmonger to a Russian supermarket. As he puts it in his introduction, which you can read now on Deskbound Traveller, “Why make a journey to the other side of the world when the world has come to you?”

The new edition has an afterword by Geoff Dyer, who was equally impressed. He writes: “The fact that it’s a book about Oxford is off-putting (I mean, who gives a toss about Oxford?) and alluring in equal measure. If he could write about this city and make it compelling, wouldn’t that be a greater tribute to his authorial prowess than if he’d written about Mogadishu? The subtitle promises ‘a different Oxford journey’, one confining itself to the Cowley Road… The attraction, for Attlee, is that the Cowley Road ‘is both unique and nothing special’; the resulting book is unique and very special.”

Thanks to Attlee and his publisher, I have four copies of Isolarion to give away. To be in with a chance of winning one, just retweet my mention of the competition on Twitter from either @kerraway or @deskboundtravel, or like and share my post about it on facebook.com/deskboundtraveller.

Terms and conditions
Entrants must retweet a mention of the competition on Twitter from @deskboundtravel or @kerraway, or like and share the post about it on the Deskbound Traveller Facebook page, by midnight on May 18. Each winner, who must be resident in the United Kingdom or Ireland, will receive one copy of the book. Winners will be selected at random and notified by May 22. Unsuccessful entrants will not be contacted. For more books from And Other Stories, see the company’s website.

*Mabey’s essay on White is included in a collection of his pieces reflecting on a life in writing: Turning the Boat for Home (Chatto & Windus). 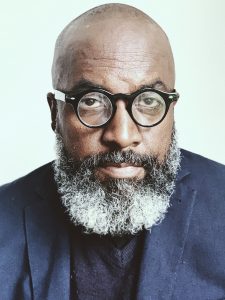 The Royal Society of Literature’s Ondaatje Prize was awarded tonight to Roger Robinson (right) for his poetry collection A Portable Paradise (Peepal Tree Press). He is only the second poet to win the prize, an annual award of £10,000 for a work of fiction, non-fiction or poetry that best evokes “the spirit of a place”.

Thanks to the lockdown, the news was announced not at a black-tie dinner at the Travellers Club in London, as it usually is, but on YouTube and social media.

The poet Pascale Petit, one of the judges — and winner herself in 2018 with Mama Amazonica — said of Robinson’s book:

“The spirit of place in this outstanding collection is the portable paradise of Trinidad in London. Roger Robinson’s profoundly moving book manages to balance anger and love, rage and craft. Every poem surprises with its imagery, emotional intensity and lyric power, whether dealing with Grenfell, Windrush, or a son’s difficult birth, [a poem on] which is also a tribute to a Jamaican nurse. This is a healing book, enabling us to conjure our own portable paradises.”

A Portable Paradise had already won the 2019 TS Eliot Prize. Robinson, a writer and educator who has taught and performed worldwide, said that winning the Ondaatje was “great on many levels. Gaining wider recognition for the political issues that are raised in A Portable Paradise is one of the most important things for me, alongside more people reading about the struggles of black communities in Britain, which hopefully creates some deeper resonating empathy.”

The prize, first awarded in 2004, is sponsored by Sir Christopher Ondaatje, the businessman, adventurer and writer. Last year’s winner was Aida Edemariam for The Wife’s Tale, a biography both of the author’s grandmother and of a country, Ethiopia.

You can read extracts from all six of the books short-listed for this year’s prize on the Telegraph Travel website.